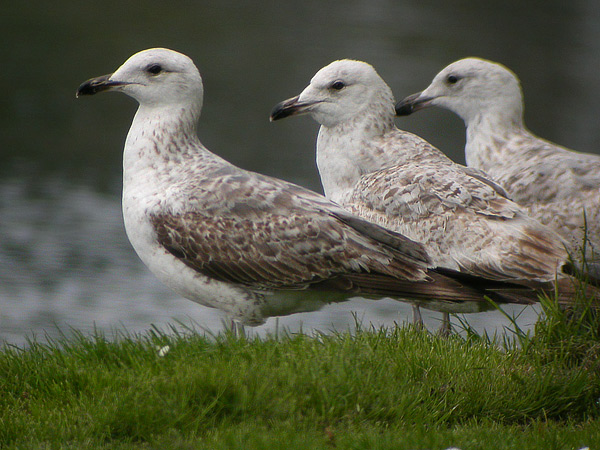 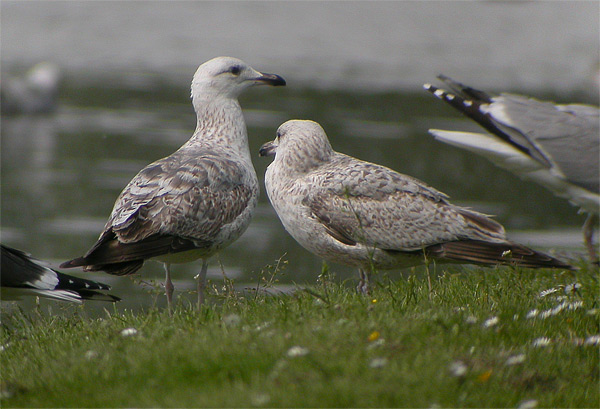 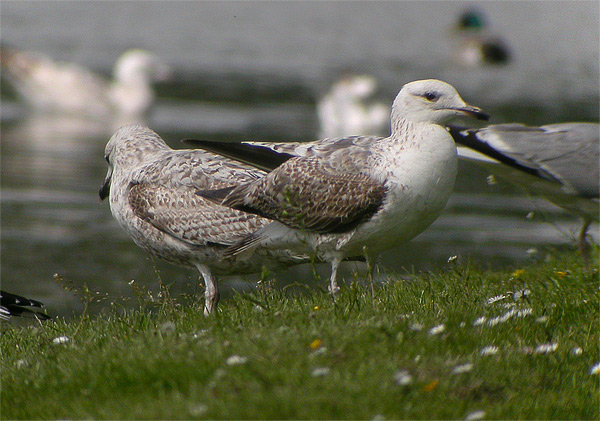 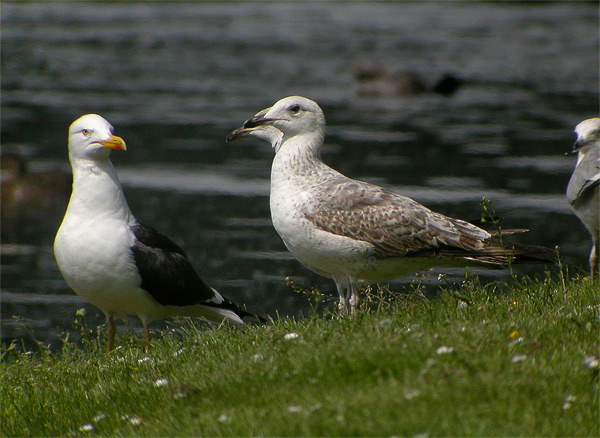 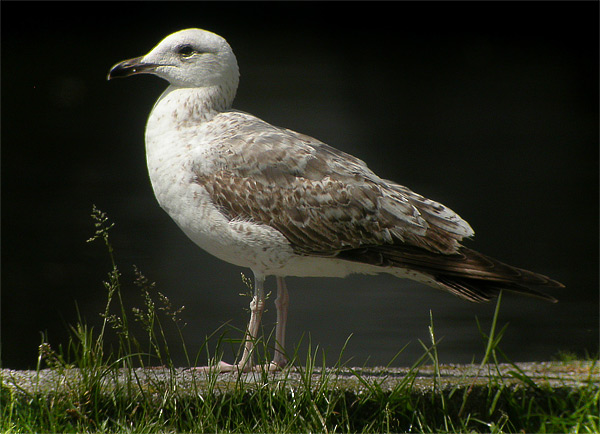 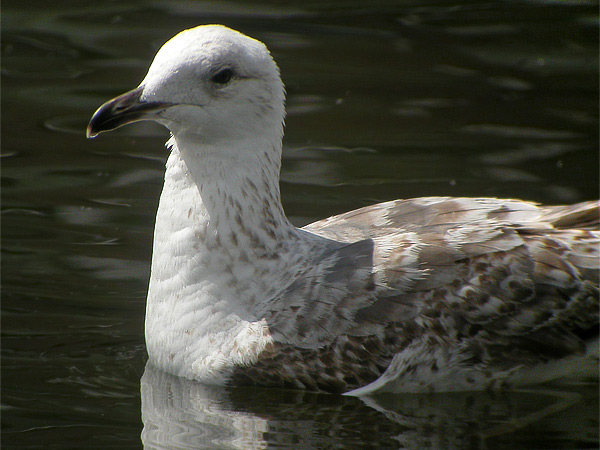 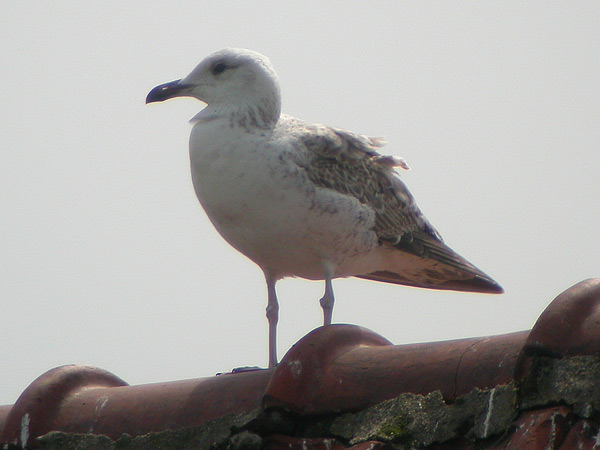 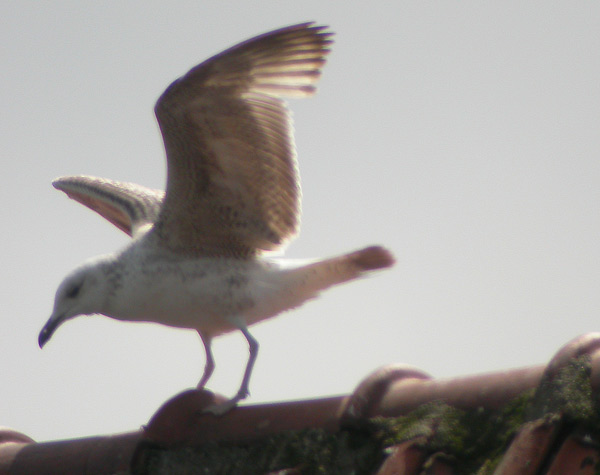 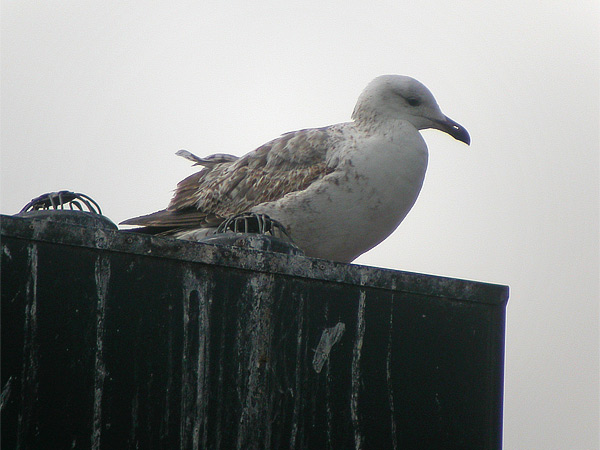 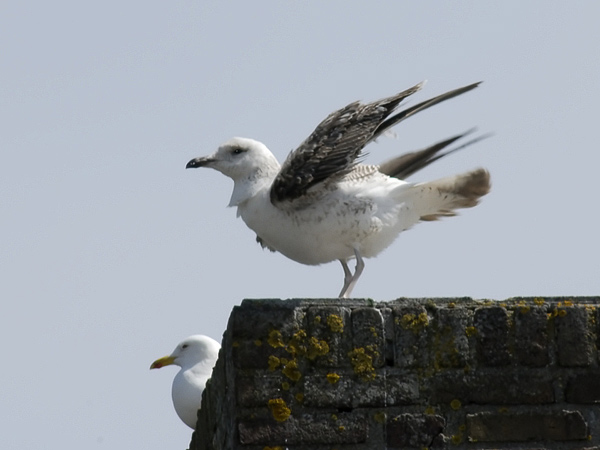 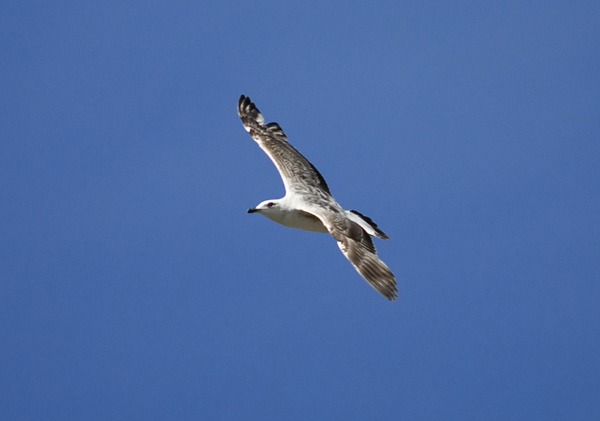 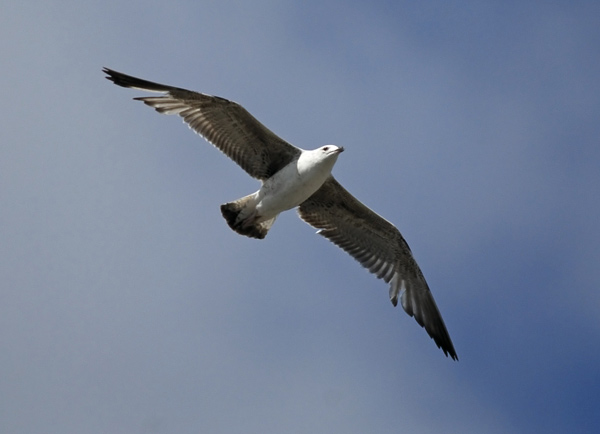 Probably significant, different from cachinnans:
1) long call: (Description based on imitation recorded a few seconds after hearing the call. Unfortunately the recording of this imitation is of extremely poor quality due to an empty battery. It can only just be heard in the recording, which is full of noise and static)
A long call lasting 2.5 seconds was given when another gull (3cy Lesser Black-back?) landed next to the Heuglin’s, which was standing on a chimney. The Heuglins spread its wings a little and gave an abbreviated long call with its head pointing somewhere between 45 and 90 degrees above the horizontal. STRUCTURE, TIMBRE and PITCH: The call was in two parts and had the timbre and high pitch of a young gull, not the full voice of an adult. The first two notes were high and similar in timbre to the begging or submissive call of a young gull. The first was more obviously descending than the second. The final three notes were lower than the first two, but the contrast in pitch was not extreme, as it usually is in cachinnans (adult at least). TIMING: These three final notes were all of the same length; there was no obvious acceleration or deceleration. The call as a whole  could be described as  klee-a kleee  kla-kla-kla. The notes of the second part of the call (third, fourth, fifth) were delivered twice as fast as the notes in the first part (first, second). The time interval between the first and second notes was similar to the time interval between the second and third, and the third and fifth. On the whole, the long call seemed similar to fuscus/intermedius/graellsii and unlike cachinnans, in which the notes of the second part would normally be much shorter and delivered more rapidly.

Probably not significant, indistinguishable from other immature large gulls:
2) submissive or begging-type call: a high, weak-sounding k’leee call, slightly descending in pitch and similar to calls of other young gulls in submissive or non-aggressive behaviour. Pure-sounding timbre, only very slight modulation if any (i.e. rapid up-and-down movement in pitch). This call was heard several times when the bird was in the water and on a roof. Once, two of these calls were heard when the bird settled on the water among other gulls (poor recording exists). The second of these calls was more strongly modulated and tended towards the aggressive call described below.
3) aggressive or assertive call: a long, harsh arrrrrgh was heard once when the bird piled into a feeding frenzy of other gulls. This call was longer than the submissive call described above, lower in pitch, and strongly modulated  or ’vibrato’. It was not as deep and coarse or ‘ugly’ as the equivalent call I have heard from two 2cy Caspian Gulls, but perhaps they can give similar calls.